Why Chris Gore Is Wrong About The Live-Action Disney Remakes 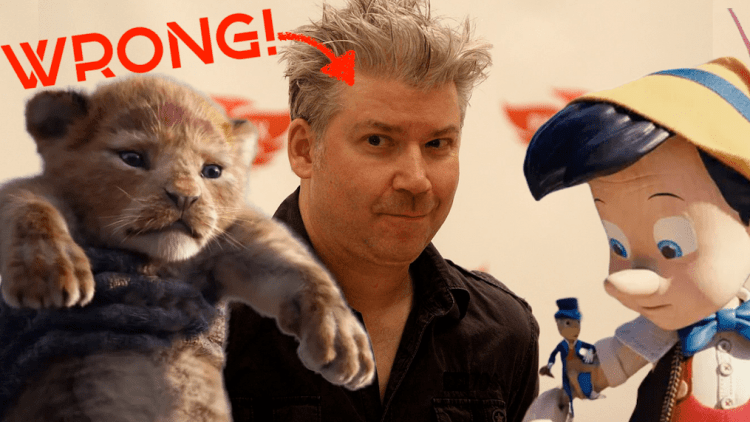 I was perusing through the internet one day and I saw the founder of Film Threat Chris Gore giving his take on the live-action Disney remakes and why he despises them so much. He even went as far as to say, “I think these are the worst films of our time.”

Gore does not seem too pleased with Disney’s latest content being pumped out to audiences, but Disney has been making live-action remakes since the 90s if you count the 1994 live-action Jungle Book film. He speaks about these remakes with such condemnation and severity that it’s almost like he’s spitting on them with such disgust. What he fails to realize is that there is still value in these films, even if people are blinded by the glitz and glamor of the hand-drawn counterparts.

Here is why the film critic is wrong on almost all fronts, with respect to the Disney remakes.

People have said over and over again that the original artists of the 2D-animated Disney films slaved night and day to create these masterpieces and don’t get me wrong. The 2D-animated Disney films are great. I’m not knocking them at all, but it’s very insulting to the remakes since it insinuates that people didn’t work hard and slave over these live-action movies. Whether it is CGI, live-action or 2D animation, art is art and thinking that one form is better for a certain film and not another is purely subjective.

Gore has said that he saw the original Pinocchio where Geppetto was dancing with his newly-alive puppet son and compared it to the live-action remake and claimed that the scene did not translate well in live-action. This is what people need to stop doing. We, as a collective, need to stop pedestalizing one medium, 2D animation, and maligning another, live action or CGI, simply because we are not used to those characters in that medium. That’s how toxic fandoms formulate.

Gore has also stated that the Pinocchio design is the exact same design, only rendered in CGI. I don’t have a problem with that. I think the hate for these films is being blown out of proportion. The fact that people like Gore nitpick these films about their deviations, casting decisions, or changing medium and can’t find any sort of value in them says more about the critic than the art. If people went in with an open mind and not a negative attitude, there would be less vitriol directed at these movies.

Moreover, Disney remakes have been said to be lazy and the filmmakers phone in the performance. If I am going to be honest, animators have phoned in their craft, as well. Look below:

People keep saying that nobody asked for these Disney remakes and I beg to differ. The Lion King, The Jungle Book, Aladdin, and Beauty and the Beast have earned over or close to a billion at the box office. Gore thinks that there is a lawyer for Disney telling them to continue this factory-filmmaking at the cost of creativity. If that is true, I ask Disney to continue to do it.

I have never been mad at a studio for doing what its sole purpose was in the first place: to make money and thrive in its industry. I wonder if Gore knows that Dumbo from 1941 was made to recoup the losses of Fantasia the year before it. So, factory filmmaking has been around before the live-action remakes were even thought of.

Since most people are drones and have a hive mentality, it only stands to reason that the majority of people will follow the mentality of the majority. The majority is that the remakes are terrible and that you are better off watching the animated movies.

I disagree with that sentiment. That might be public opinion now but opinions change over time. I believe that before the feminist movement, it was public opinion that the woman stayed home and did housework while the man went to work. It was also public opinion that if you got a divorce, it would bring shame upon the family. Nowadays, women make their own money and more than half of marriages end in divorce.

We should also remember that there have been live-action remakes that have not had the Disney label and they have either been positively received or become cult classics, down the line. The first that comes to mind is Peter Pan from 2003. Admittedly, the film was bombed at the box office, as it did not have the Disney label under it, but it still received positive reviews from critics and audiences.

Another that comes to mind is How the Grinch Stole Christmas. This film may have gotten mixed reviews, but it became a classic, years down the line, as it was shown every Christmas and Jim Carrey’s performance was universally acclaimed. That was a remake of the 1966 Boris Karloff cartoon.

Also, since we started this conversation because of the new Pinocchio remake, I wonder if Gore knows that there was another live-action Pinocchio movie released in Italy in 2019, which starred Roberto Begnini as Geppetto. In this film, Geppetto is also gleeful that his wooden son has come to life. He sleeps with him, makes his new legs, and attempts to send him off to school. The puppet encounters other puppets like him when he sees Mangiafuoco’s puppet show, which looks like something out of a Twilight Zone episode.

Moreover, the fox and the cat are just grown men dressed like animals, like how Johnny Depp was in Into the Woods. I streamed that version of Pinocchio on Amazon Prime and found that it received a positive rating of 84% on Rotten Tomatoes. I guess being creepy and weird only applies to “Disney” live-action remakes.

With all of that being said, Chris Gore, I invite you to a civil debate on the live-action Disney remakes and would be willing to talk to you about your beef with them and my love for them. Thanks.

Richard has been a writer for Sportskeeda, Movieweb, Fansided, Your News Media, The Total Plug, The DMV Daily, No Film School and Film Threat. He has also been a videographer and editor for The Daily Caller and One America News. He has big dreams of achieving success as an Oscar-winning filmmaker.