Is David Tennant bringing his 'Clone Wars' vibes to the 'Ahsoka' series for Disney Plus? 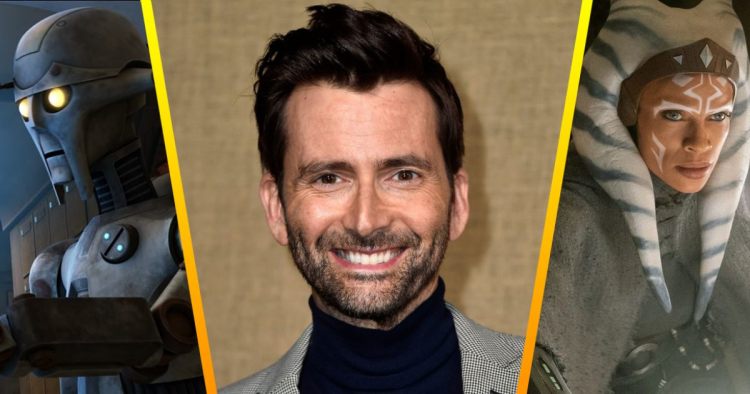 It won’t be long now until we see the premiere of the ‘Ahsoka‘ series starring Rosario Dawson as Ahsoka, which is expected to drop in the first quarter of this year – 2023. The first season has already billed cast members like Mary Elizabeth Winstead (Birds of Prey) and even Hayden Christensen as Anakin Skywalker’s Darth Vadar.

Sadly, most of the details are being kept tightly under wraps with almost no official information on who anyone else is playing in the show, despite the release date edging nearer by the minute. However, a recent rumour on Reddit supposedly offers information on a character from The Clone Wars who may have some part to play.

This latest Star Wars rumour comes from a Reddit user known as ‘PlayThenPause’, who said in a comment “David Tennant is back for Ahsoka”, supposedly backing up earlier rumours on Huyang’s return.

No official announcement or confirmation has been made by Disney or Lucasfilm on David Tennant reprising his role from The Clone Wars, but if true, we could possibly get a first look in an official trailer.

When Does Ahsoka Come Out?

Despite there being some expectation for the series to drop in the early months of 2023, there is still speculation that the series will be released later on in the year due to the third season of The Mandalorian coming soon.

However, no official date has been announced yet so it all depends on what Disney Plus tell us once they’re ready to supply the details – hopefully, we won’t be waiting too much longer.

Ahsoka is currently set to release sometime in 2023, no official date has been made as of yet.