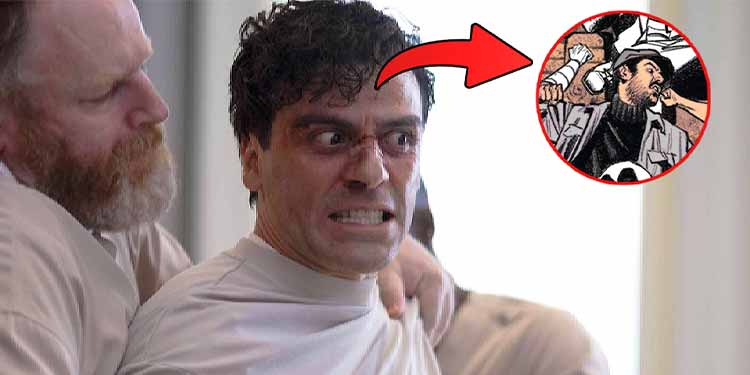 Jake Lockley is the third personality attached to Marc Spector, the second being Steven Grant. Marvel Studios’ Moon Knight fans are all aware by now that a third exists and that the show is teasing his presence. There is at least one Jake Lockley easter egg in almost every episode of Moon Knight, so today I am going to go through every reference found in episodes one to five.

In episode one of Moon Knight, we are introduced to Steven Grant, a shy and anxious museum worker.

During his shift at the museum, a woman approaches him and reminds him that they have a date coming up. This baffles Steven as he has no memory of setting up any date, which leads fans to believe that Jake Lockley was the one who did.

Marc Spector wouldn’t be going around setting updates as Marc is a married-ish man, who is still in love with his wife.

Steven Grant still chooses to go through with this date, even though he has no recollection of setting it up in the first place.

The most important thing to notice about this though is the fact that Steven Grant is a vegan. So why would he have set up a date at a steak house? Well, he wouldn’t have, but maybe a Mr. Jake Lockley would of.

In episode 2, Marc struggles to keep Steven from taking over his body while chasing down some bad guys.

Steven does manage to stop Marc from fighting and successfully takes over the body to relinquish Marc’s control. However, Marc later awakes inside a taxi headed for the airport, this is a Jake Lockley reference.

In the comics, Jake Lockley was a taxi driver, or at least he used it as a cover-up. I am in full belief that each time a taxi pops in Moon Knight, it is a Jake Lockley reference every time.

Now this one is obvious because Jake Lockley literally takes over Marc’s body and uses it to kill multiple baddies.

Marc awakens yet again from losing control and instantly blames Steven, questioning Steven as to why he has killed everyone. Steven replies by saying it wasn’t him, which leaves Marc to wonder; who did?

Well, it was Jake, but sadly the scene is interrupted by Khonshu and it hasn’t been mentioned since!

The final clue in episode 3 is when Arthur Harrow (Ethan Hawke) states that he has no idea how many personalities exist within Marc Spector.

This is a major hint that a third, or more, is coming and does indeed exist within Marc’s mind. Harrow is already well aware of Steven Grant at this point, plus he knows about Marc’s condition. So why else would he have said this if not to tease a future personality breaking out?

This is by far my favorite Jake Lockley nod in season 1 of Moon Knight, literal goosebumps while watching this one.

The finale of episode 4 included Marc finding Steven within a Sarcophagus while running around Egyptian God’s version of Limbo. Once Marc and Steven are free to roam around though, they find a third Sarcophagus inside a similar room to where Steven was found.

The Sarcophagus shakes while Marc and Steven choose to ignore it and continue roaming around the halls of Limbo. This Sarcophagus clearly contained Jake Lockley.

Now, this easter egg has been “debunked” by the Director himself, but we believe they are just fibbing to increase our suspense!

During a “therapy” session with Arthur Harrow, or a vision of him that is, Marc Spector can be seen bloodied and bruised for a brief scene. Although when Marc speaks, his accent is incredibly different from his usual accent.

The accent sounds almost identical to what Jake Lockley’s accent would sound like in the comics. We here at CoveredGeekly fully believe that this scene was in fact Jake Lockley but even Harrow was unaware.

Yeah yeah, I know… but come on another taxi?!

The taxi sighting in my opinion is deliberately meant to stand out in the background during this scene of episode 5. You can clearly see a taxi driving slowly while Marc and Steven go through trippy flashbacks of their childhood.

If you ask me, this is probably Jake Lockley himself driving around, spying on them. If it isn’t, I still believe fully that it is still a nod to Jake Lockley’s profession as a taxi driver.

The finale of episode 5 revealed that the two hearts from Steven and Marc were not enough to balance the Egyptian “scales of justice”.

While the scales do not balance, their chances of being left frozen in eternity down in the underworld heighten. Although when Steven falls off the ship and becomes frozen in time, the scales balance, even though they still have two hearts on them.

We have theorized that this could be due to the fact that they never had Jake’s heart on the scales. When Steven fell off the ship, the two hearts became balanced as there were now only two personalities left sailing on the ship.

2 hearts = 2 personalities, with Steven out of the picture, this was now correct.

This is the worthiest mention of them all really, as Jake Lockley is basically hinted at during the ending sequence of every episode.

You can see three faces being split apart while the credits role, each episode, clearly hinting at three personalities. 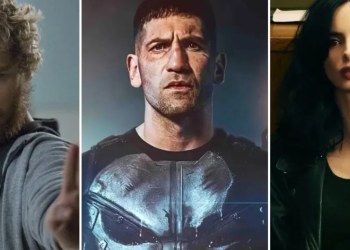 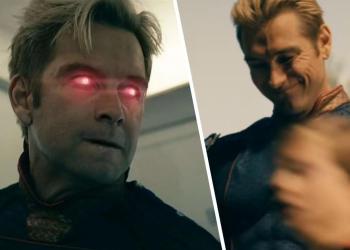