Is Hank Pym joining the Guardians of the Galaxy, probably not, but still... something's up. 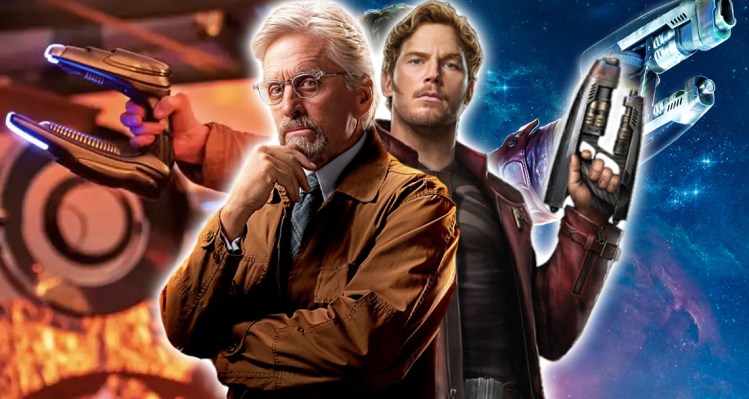 In the latest batch of official stills from the upcoming Marvel Studios film ‘Ant-Man and the Wasp: Quantumania’, Michael Douglas’ character Hank Pym can be seen using a familiar-looking weapon. In the newly released still from Empire Magazine, Hank Pym can be seen holding up a gun inside the Quantum Realm, which fans couldn’t help but notice looked almost identical to the gun fellow MCU alumni Chris Pratt has in ‘Guardians of the Galaxy’.

Despite the gun having a very similar shape to the weapon that Star-Lord uses in various films from the Guardians franchise, it is definitely a completely different weapon altogether. However, this doesn’t rule out the possibility that the designers behind the film didn’t take inspiration from Peter Quill’s iconic blasters, but unfortunately, nothing has been said as of yet from the team behind the threequel.

When comparing this new weapon to the blaster often used by Peter Quill, it is easy to spot the difference between the two, despite the very clear similarities. Star-Lord’s weapon doesn’t have as much of a gap between the two barrel-looking parts of the weapon, plus this new gun held by Hank Pym seems to have more of a futuristic look to it, whereas Quill’s is more rustic.

We can assume that this new design has been used to show off the advanced technology that Kang has stored in the Quantum Realm for him and his army to use against the protagonists. Michael Douglas hasn’t had many lines of dialogue revealed in the promotional footage so far, fans expect the studio is hiding something that they want to wait until the official release to reveal about the character; is this still teasing something big? What if Star-Lord’s gun does end up having some odd connection to Kang’s technology down in the Quantum Realm, could this be another way they will connect the next big Avengers-level villain to more characters?

RELATED: Character Descriptions From ‘Ant-Man And The Wasp: Quantumania’ Released

Michael Douglas has been with the Marvel Cinematic Universe since the first Ant-Man film, which was filmed back in 2014 with the official release being in 2015. This means that Douglas, and actors such as Paul Rudd and Evangeline Lily, have been portraying their MCU roles for almost a decade now. So it is only natural for fans online to speculate that one or two characters may be leaving the franchise, but we’ll just have to wait and see. If the theory and speculation turn out to be correct, this could very well be Hank Pym’s last venture in the MCU, with this new still possibly hinting toward Hank Pym going out with a bang. Unless the Disney marketing team are just trying to throw us off the scent, with their extremely clever marketing techniques, can we truly trust anything after the promotional secrecy behind ‘Spider-Man: No Way Home’?

Ant-Man and the Wasp: Quantumania comes out in cinemas on February 17th, 2023.