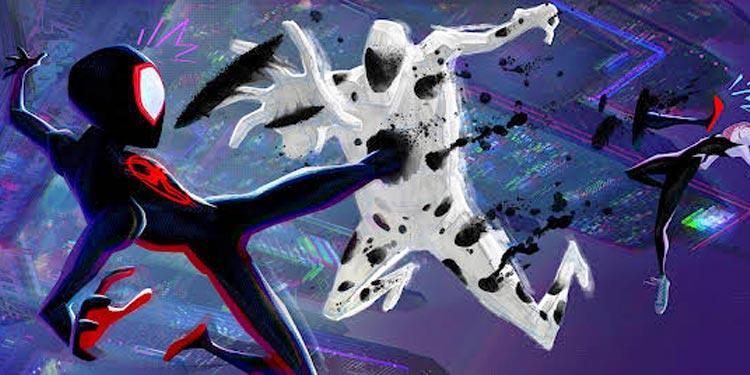 The highly anticipated sequel to Spider-Man: Into The Spider-Verse, ‘Across The Spider-Verse‘, is a year away. However, that hasn’t stopped Sony from revealing more and more about the movie over the last year or so. Such as when they revealed the first 15 minutes at this year’s CinemaCon to keep the hype alive.

The original release date for Spider-Man: Across the Spider-Verse was going to be early 2022. Although due to the current situations of the world, the delay was inevitable really, with the third movie following suit.

Now even more new details have emerged at the Annecy International Animation Film Festival of 2022. Showcasing the villains, new characters, and technical information regarding the making of the movie. Plus revealing that the Marvel Comics character ‘The Spot’ will be making his debut.

240 Characters To Be Introduced

Justin K. Thompson, co-director, revealed that 240 characters will be introduced during the next two movies. Easily taking the record of most characters in a Sony animated movie franchise. However, it has been speculated that majority of these characters will most likely be seen in the background.

Details on the six dimensions that will be heavily featured in Across The Spider-Verse also emerged at the event. According to the co-director, each dimension that we travel to during the movie will look drastically different to one another.

New technology was also engineered to create the dimension that Spider-Gwen lives in, with a water colour and paper texture style to it.

Another highly anticipated character is Oscar Isaac’s ‘Spider-Man 2099’ who we briefly got to see during the post-credits of Into The Spider-Verse.

What we know so far about the movies rendition of Spider-Man 2099 is that he will be the most badass version we have ever seen. Donning a suit that uses Nano-Tech similar to the MCU’s Iron Man, wings, claws, and more amazing features.

Climbing up walls, not by crawling, but by plunging his suits claws into the building and jumping up furiously. Reasonably due to this, Sony has dubbed this version of Spider-Man 2099 as the “Property Damage Spider-Man.”

The Spot Makes His Movie Debut

One big takeaway from this event was the reveal of Marvel Comic’s character ‘The Spot’ being announced as the film’s villain.

The Spot being voiced by Jason Schwartzman (Scott Pilgrim vs. the World).

His main power is that his body is covered in interdimensional ‘spots’ that allows him to travel to any dimension he wants to. He is even capable of using this power to travel around freely, via a teleporting-like ability.

Definitely going to be a tough baddie for Miles Morales and his friends to face, that’s for sure.

When Does Across The Spider-Verse Release?

Sony’s Spider-Man: Across The Spider-Verse is currently set to release on 2 June 2023. Follow our Twitter to keep updated on any new details here!