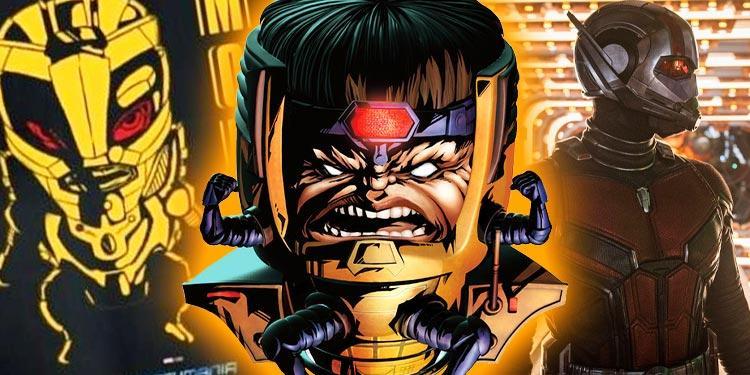 Ant-Man and the Wasp: Quantumania is only 5 months away, and public marketing for the long-awaited movie is picking up the pace. This year’s San Diego Comic-Con featured its first promotional footage, and a new teaser was shown at Marvel’s D23 Expo presentation. We have examined and made the audio transcriptions for the teaser here. Merchandise for this movie is on its way and alleged leaked merchandise featuring one of its villains, MODOK, has found its way to the internet.

Now, most of this is going to be changed in Quantumania, as they need to fit the character in with the collective story of the MCU (Marvel Cinematic Universe). MODOK is likely going to be Darren Cross, whom we last saw in Ant-Man.

Leaked merchandise for Ant-Man and the Wasp: Quantumania has revealed a new peek at MODOK. Looking at the image, it is very obvious that Marvel has changed his design to fit his MCU adaptation, which they do quite a lot. His body is completely covered with armor, making him look vastly different when compared to the comics. This further proves that MODOK could indeed be Darren Cross due to his bug-like design.

However, some users have found a piece of fan art that is a carbon copy of the leaked merch. This was made by Instagram user lexx_177_ and was uploaded last month, predating the merch. Even so, we can’t jump to the conclusion that the merch was faked. Theater chains and merch manufacturers are notorious for using fan art to promote upcoming titles. From Spider-Man: No Way Home to Thor: Love and Thunder, they have used fan art for marketing the movie. We also know that this art was based on descriptions of MODOK from the Comic-Con teaser. A simpler explanation would be that the art was very accurate to the movie’s design. Our own sources have also backed this, stating that the merch was exactly how MODOK looks in the teaser.